The 7.62mm is a rifle cartridge which is usually used by battle rifles, sniper rifles and machine guns. It does higher damage and has more penetration power when compared to the 5.56 NATO but the guns using this caliber often have higher recoil. It can even perform an instant kill when used by sniper rifles. This kind of caliber is powerful, thus it costs more which is $80 per 30 rounds in the game. 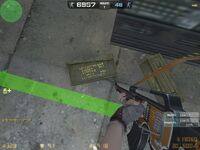