707
The 707th Special Mission Battalion (korean: 707특수임무대대) or simply 707 is a Counter-Terrorist faction in Counter-Strike Online.

Once a player uses this model in game, he will get additional 20% experience points and 10% game points.

Other effects that vary between regions:

The 707 Special Mission Battalion, first formed with 120 soldiers in 1982, has been enhancing its reputation internationally. Forces including Germany’s GSG-9 and USA’s Delta force train with 707 troops. Only elite soldiers highly skilled in shooting, airborne, rappelling or martial arts can join the 'White Tigers'.

The 707th Special Mission Battalion had adopted these weapons in the game as their standard weapons: 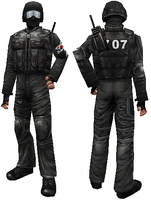 The 707 in the hack shield banner 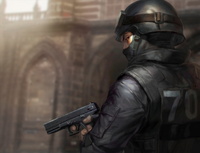 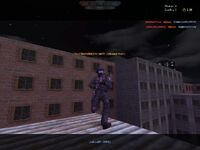