The 9×19mm Parabellum or 9mm is a pistol and submachine gun cartridge in Counter-Strike Online.

The 9×19mm Parabellum is one of the most commonly used pistol cartridge in-game. It is mostly used by pistols and submachine guns. This caliber has weak penetration power but weapons using this caliber type usually have high rate of fire. It is the cheapest caliber in-game costing $20 per 30 rounds.

The weapons that are chambered with 9mm cartridge: 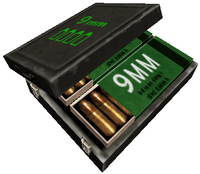