Abyss 3 is the third Zombie Mods exclusive map in the Abyss series. It was released alongside with Zombie: The Hero and also available in other Zombie Mods. This map takes place in the basement of Rex Research Institute. It has a bunker that can prevent zombies from coming in. This map enables the players to swim. Try to close the bunker's doors first before the zombie appears.

A year after the incident at Rex Laboratory, the unidentified sound of machines was heard coming from the closed factory located near the laboratory. In order to investigate the noise, members of the security team entered the factory but radio contact was lost for over an hour. In response, government agents infiltrated the factory only to find that it had already become a facility for transforming deceased corpses into Zombies. The secret behind the increasing number of Zombies was the factory itself.

This map was released alongside Zombie: The Hero and Double-barreled shotgun on: 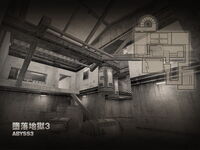 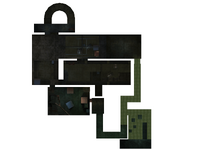