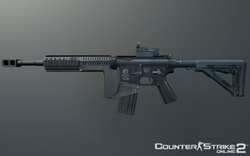 Human
Alexander .50 Beowulf is an assault rifle in Counter-Strike Online 2.

This is an assault rifle based on the AR-15 that use .50 Beowulf rounds developed by Bill Alexander of Alexander Arms. The round is intended to improve stopping power greatly at short- to medium-range as compared to the standard 5.56 NATO round.