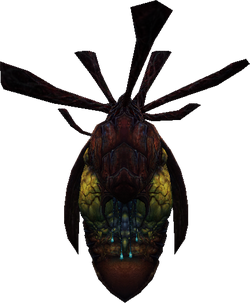 Angra Cocoon is an egg which contains Angra inside, featured in Angra Nest and New Zombie Shelter maps.

The Cocoon of Angra is the final phase of Dione before its evolution to Angra.

In Angra Nest, the players will have to shoot it until the shield breaks.

In New Zombie Shelter maps, it appears as a stationary object, but accompanied with "turrets" that will shoot passing players with a poisonous gas. Note that more than one Cocoon can appear in this mode, they stay at some certain places.

Retrieved from "https://cso.fandom.com/wiki/Angra_Cocoon?oldid=220004"
Community content is available under CC-BY-SA unless otherwise noted.