Assault is a hostage rescue map that pits the Terrorists, which are located inside a large warehouse, against the Counter-Terrorists, which are located outside of the warehouse and currently surrounding it. The Terrorists must defend two ground entrances (Front entrance and backdoor), and another entrance on the roof where Counter-Terrorists may come in through the ducts. This map is quite small, so it is suitable for small-medium amount of players. There are a total of four hostages that are all located in one room. 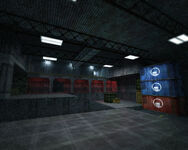