Zombie H Set: Battle Veteran is a supporting set, only usable in Zombie: The Hero.

When using this set, the player can deal 30% more attack damage to zombies as default damage and can be increased to 230% (purple) when Morale Boost increases.

When turning into a zombie and killed, the player can revive almost instantly.

This item is only available for Zombie Hero mode.

This set was released alongside Zombie: The Hero and Double-barreled shotgun on:

This set was released alongside Open Beta Test and other zombie sets on: 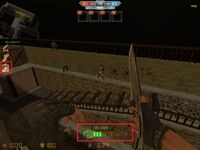