The living legend of SAS. He is a true soldier who always practices the slogan 'who dares wins'. After rescuing Erica from the Lost City, he saw the contents of the secret document found at the institute. His life, who had been loyal to the state with everything he had, became completely different. As the past of living in the world before becoming a soldier was exposed, he was disgraced. Everything disappeared in one moment, but he jumps into the back world again for Erica. 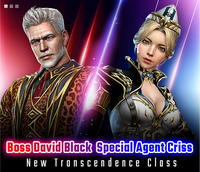 "Let's wipe them out"