Bots or AI players (Artificial Intelligence) is a system in Counter-Strike series.

Bots can only be used in Original, Deathmatch, Team Deathmatch, Bot Zombie Mod. They are fought as an opponent instead of real players. In bot modes, players can only join the same team as the room host. The room host can select their desired difficulty. In Counter-Strike Online, the host has to kill an amount of bots to unlock a new difficulty. The task gets more difficult as it goes. When a player joins a room, a bot will automatically join to balance the game if the host has checked Bot balancing. If there are friendly Bots set by the host, they will be replaced by a connected player, thus they will come back when a player drops out.

In Battle Rush and Zombie Giant, the bots are automatically added when starting a game. The room host cannot select their difficulty or number of bots.

The bots can perform a radio talk, similar to players and follow the radio commands given by the players. The bots will either accept or decline the commands, depending on their coop level. The bots will talk by Voice Chat by default and able to use this to communicate with other bots. They can also carry out the task of the mode or map as if they are a real player. However, the bots need navigation files to navigate around the map.

The bots use classic weapons. Harder bots tend to use rifles, while easier bots plainly choose any random primary weapons they can buy. Occasionally, they can be seen using other weapons like QBB-95, MG36 or USAS-12. This happens on a bot that doesn't have any weapon preference, which picked a dropped weapon before they could buy any weapon, thus making them seen like they have bought it. Using this advantage, the player can drop a friendly Bot weapons they cannot buy to make them stronger. 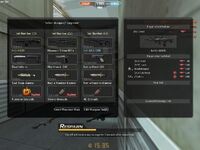 Some bots have weapon preferences, meaning the weapon they will buy will be predictable. Knowing their weapon preferences will help players on awaring them. Notice that some of the bots don't have one. Also, some of the guns they prefer cannot be bought because cheaper guns has been set at higher priority (noted as (buy altered)). However, they will pick up those weapons if the weapon they have has lower priority or did not match their preference.

After death respawn, they will buy random weapons.

In Bot Zombie Mod, BOTs are equipped with different choice of weapons:

Retrieved from "https://cso.fandom.com/wiki/Bots?oldid=260711"
Community content is available under CC-BY-SA unless otherwise noted.