This is a 30 round 9x39mm fed weapon, which is remodelled after the Groza. This weapon has a built-in Charger Generating System (CGS), which integrates the energy generated by firing bullets and converting them to amplified energy, which is released in the form of laser beams when the user presses the trigger, that are deadly for the undead. 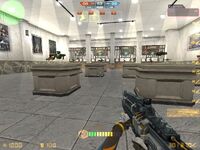