Counter-Strike (originally marketed as Half-Life: Counter-Strike) is a multiplayer first-person shooter initially created by Minh Le and Jess Cliffe as a mod for Half-Life. By the fourth beta, Valve Corporation began assisting the two developers and ultimately offered them jobs. Both of them accepted, and the rights for the game were acquired by Valve. After over a year of public beta testing, the retail version of Counter-Strike was published by Sierra Entertainment on November 8, 2000 for Microsoft Windows. On July 31, 2004, Valve shut down all servers from the retail version and switched to their Steam service. Since the creation of the franchise, various sequels and spinoffs have been created such as Counter-Strike: Condition Zero, Counter-Strike: Source, and the latest in the series, Counter-Strike: Global Offensive.

There are three official game modes in Counter-Strike: 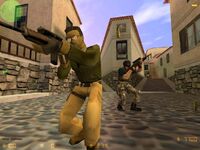 Beta Elite Crew and Beta Phoenix Connexion in the map Italy. Both are wielding the Krieg 552. 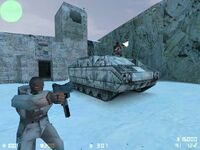 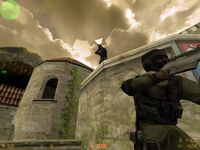 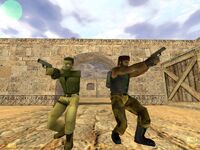 A Beta Elite Crew and a Beta Guerrilla Warfare wielding Glocks are heading for Bombsite B in the map Dust. 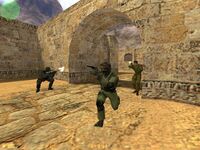 A SAS operative is engaging an Elite Crew member with a Bullpup in Dust.

A Guerrilla Warfare member is attacking the Counter-Terrorists in Havana.

A Condition Zero GIGN operative is escaping from the C4.

A GIGN operative wielding a Bullpup is engaging two Phoenix Connexion members wielding the CV-47 and KM UMP45 in Prodigy. Note that a Flashbang is going to burst on the ground.

A SAS operative wielding a UMP45 is engaging an Arctic Avengers member wielding a CV-47 in Havana. 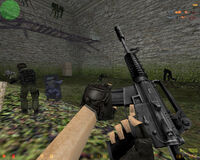 A Counter-Terrorist is reloading an M4A1 in Aztec.

A GSG-9 operative with a UMP-45 is engaging a Phoenix Connexion member wielding a Krieg 552 in Havana. 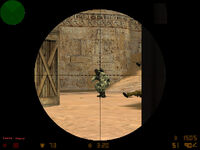 A Counter-Terrorist operative is aiming at an Arctic Avengers member with a Scout in Dust2.

A GIGN operative wielding an MP5 is engaging an Elite Crew member with a Krieg 552.