For her Terrorist counterpart,see Yuri.

Criss is a Counter-Terrorist character in Counter-Strike Online. She is a staff sergeant of the British Army. Her model can be obtained permanently by purchasing with cash points.

﻿Criss started off as a medic in England, but her combat skills earned her so much respect that she was dispatched to the Counter-Terrorist forces. Everything about her is a big mystery, but there are rumors that connect her to the Rex Research Institute.

In the Official Counter Strike Online comic: Side of Shot, it is revealed that Criss worked for the Rex Research Institute by specifically performing tests on live human experiment subjects. However, these tests lead to the deaths of those individuals. She later encountered Jennifer held captive.

As Criss escaped the research facility from an internal outbreak of zombies, she managed to collect a blood sample which most likely contains the zombie transforming virus.

Criss styles the front sides of her hair into short mini braids supported by a thin fabric string which ties it. She wears a white corset which looks like a camisole and a pair of black jeans. Her underwear is black in color with the sides of her G-string underwear peeking out from her jeans.

For footwear, she wears dress shoes that use silver colored straps and possess a slightly high heel lift.

She also wears a choker made out of pearls, white gloves/armband with a red cross on it.

This model was released alongside Yuri and Angel vs Devil package on: 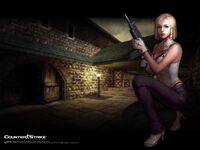 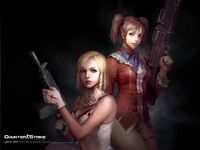 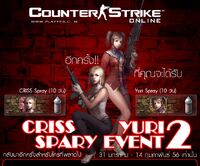 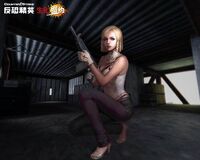 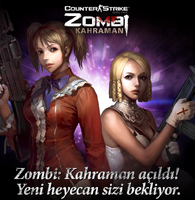 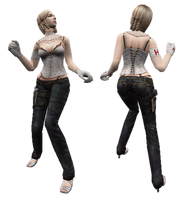 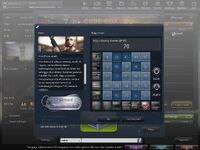 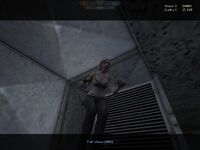 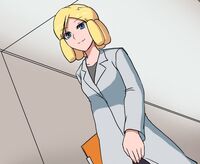 Add a photo to this gallery
Retrieved from "https://cso.fandom.com/wiki/Criss?oldid=279670"
Community content is available under CC-BY-SA unless otherwise noted.