A modified version of the Gungnir. It has been upgraded for increased destructive force, but at the cost of increased power consumption. Deals lightning damage to nearby enemies and has an energy-based fire mode for ranged battles. 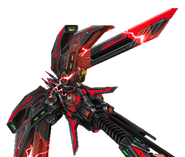