Dr. Rex is a non-player character who appears in Conspiracy, Envy Mask, Paranoia and Madness chapters and was the primary antagonist of the Zombie Scenario series in Counter-Strike Online up until Zombie Scenario: Season 4.

The Rex Laboratory is most commonly known as an institute for the production of American military weapons, but there is more going on behind closed doors. Dr. Steve Rex, the director of the institute, is one of the foremost authorities in the field of bio-engineering and mechanical engineering, and is leading the classified Super Soldier Project.

Dr. Rex is developing very powerful “Super Soldiers” in a classified area, whose sole purpose is to defeat the Terrorists. However, due to limited strength and endurance, none of the soldiers have been able to control Dr. Rex's high-tech battle gear. As a result, it has been impossible to complete the Super Soldier Project. Dr. Rex assessed that the human body has limited capacities and he is looking for a way to overcome this obstacle.

After hitting a roadblock in his research for the Super Soldier Project, one day, Dr. Rex received a private report from an anonymous informer. This report revealed that mutant, powerful animated corpses, referred to as zombies, had existed in Europe decades ago.

Dr. Rex was invigorated by the private report. He sent his team to bring back the excavated bodies, set up a secret laboratory below ground, and began studying the corpses. He continued, obsessively, for months with his horrible study.

Dr. Rex eventually succeeded in formulating the Rex Virus, which enhances the strongest power in the human body, without any pain to that human. However, there was a side effect. Upon infection by the virus, the human would become a zombie.

These zombies had no self-consciousness and their sole purpose was to murder all humans – regardless of their association with Terrorists or Counter-Terrorists. For Dr. Rex, consciousness was an important prerequisite for using his high-tech battle gear, so he couldn't have mindless zombies being equipped with that much power. In the end, he decided that his experiment had failed and sealed the secret underground laboratory for good.

Dr. Rex appeared as a secret client. When Gerard and Jim's team moved to the transaction place to deliver the research sample, he welcomed them by waves of zombies. However, the team still survived.

Dr. Rex finally revealed himself. He mentioned about his Super Soldier Program to create a super soldier that will be useful for human kinds. However, his experiment failed. Instead of super soldier, zombies are born and the viruses are viral.

Dr. Rex became the main boss in Paranoia chapter. After being infected, he transformed into a gigantic zombie which has a mixed appearance from other zombies (except the poison snakes on his back), for example, he has Oberon's claw, Fallen Titan's hand and Revenant's armor.

Rex possesses attacks which are similar to previous bosses:

Dr. Rex can protect himself in an egg-shaped blue shield, which will release a shock wave afterwards.

Later, he appears in Madness as the final boss at Round 5. Players must annihilate him to achieve the final victory. 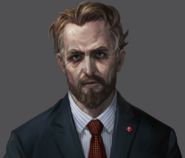 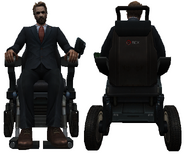 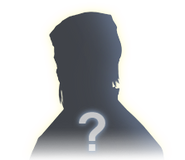 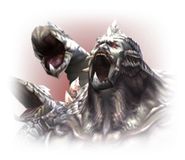 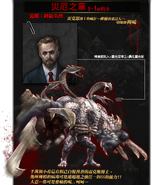