For his original version, see Gerard.
For his counterpart, see Private Erica.

A superior who thought his talents were going to waste after the events of the Lost City mission. Taking the role of a drill instructor, he was able to replace his sorrow and aimlessness with direction and hope for a new generation. 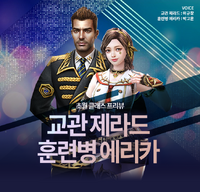 "Time for a demonstration!"