See Tammy for her rival.

Emma is a female Counter-Terrorist character in Counter-Strike Online 2.

Emma is the heiress of the British aristocracy, William Group, and the only daughter of Sir William. She is the youngest graduate of the University of Oxford, clay shooting events of this year's Olympic gold medalist, and a National Geographic explorer.

As a Chairman of the William Cultural Foundation that unfolds service activities around the world, she witnessed all the terrorists've done in a refugee camp while doing a relief mission throughout Middle East and Africa, and decided to jump directly to the counter-terrorism war.

With a global network, William Group can help the CTU's operations by giving information.

Lobby screenshot
Add a photo to this gallery 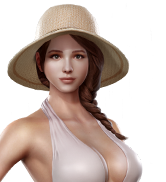 Shop icon
Add a photo to this gallery
Retrieved from "https://cso.fandom.com/wiki/Emma?oldid=260025"
Community content is available under CC-BY-SA unless otherwise noted.