For his counterpart, see Ishmael.

Ethan is a Transcendent grade Counter-Terrorist character in Counter-Strike Online.

An inquisitor who eliminates evil and strives to do good. He has eliminated numerous villains, as if to prove actions are worth more than words. His calm voice and handsome appearance have made him very popular. While he looks calm and gentle on the outside, he loses his cool if he makes a mistake or faces an unexpected situation. He has troubled feelings towards Ismael, who has vampire blood despite being a hunter. He watches her closely, waiting for the moment she proves herself evil. 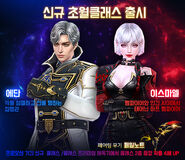 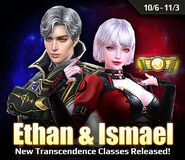 "There will be awakening"