Evie is a guest character in Counter-Strike Online 2.

Evie is a magician from Vindictus. She was revealed earlier as a guest character for Counter-Strike Online 2. She can be played in Defense mode only. 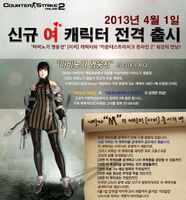 Ditto, with Leet
Add a photo to this gallery

Retrieved from "https://cso.fandom.com/wiki/Evie?oldid=245755"
Community content is available under CC-BY-SA unless otherwise noted.