The Fusil Automatique Léger ("Light Automatic Rifle") or FAL is a Belgium rifle fed with 20 rounds of 7.62 NATO. It is famous during Cold War era and boasts high firepower and accuracy. However, it has low magazine capacity and quite heavy. 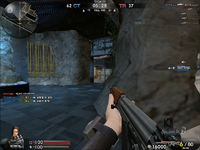