The FNC is a 5.56mm assault rifle built in the 1970. It has been adopted by several countries' armed forces and is currently still in service. However, the Belgian army is replacing this weapon for the FN F2000.

A SEAL operatives with FNC 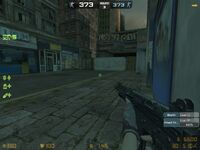 Retrieved from "https://cso.fandom.com/wiki/FN_FNC?oldid=280705"
Community content is available under CC-BY-SA unless otherwise noted.