Flame Jackhammer holds 15 rounds of 12 Gauge Incendiary. Its damage was improved by increasing the number of magazines and replacing the ammunition type, complementing the existing weakness of the gun. It gives burn effect to the victim, giving damage over time for several seconds.

This weapon can undergo Weapon Enhancement to enhance its damage and magazine size. 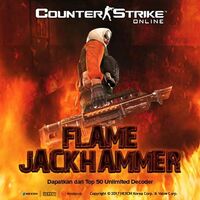