The Free Update is a major patch that overhauls several in-game mechanics.

Improved the existing killing effect's notifications and feedbacks according to situation by adding a variety of notification.

An item to confirm the manufactured weapon. This item requires Grade S Combat Blueprint and Permanent Durability Material to do so.

Reorganized the rewards after completing the missions.

Reorganized the items inside the Gift Boxes.

Battlefield Supply's items have been updated.

A machine gun developed by Aegis Institute fed with 120 rounds of 7.62mm. When facing a huge number of enemies, the user can switch to Thanatos Blade System.

The Christmas version of Tomahawk decorated with reindeer horn and blinking lamps. Its secondary mode can knock zombies away in Zombie Scenario and Zombie modes. 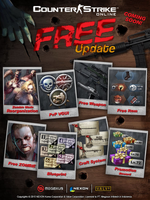