HE Grenades are very useful to damage enemies nearby a corner. It bounces upon obstacles when it is thrown. To throw further with the grenade, aim at about 45 degrees angle. It is possible to throw grenades above walls in some maps making a surprise attack to the enemy. Therefore, it is also useful to force enemies out of hiding.

If friendly fire is off, the player will not injure their teammates with the explosion except themselves and the enemies. Maximum damage for a HE Grenade is 70 to enemies and the thrower. The damage done for teammates is greatly reduced as a tolerate action. Wearing a Kevlar can greatly reduce its effect. 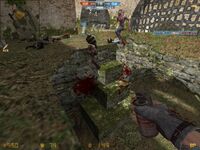 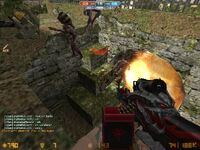