In Half-Life, players will play as Dr. Gordon Freeman, a theoretical physicist and also the main protagonist who must fight his way out of Black Mesa facility which its experiments had gone terribly wrong, teleporting aliens from another world (Xen).

Mike Harrington, a former Microsoft employee who founded Valve Corporation, had difficulty finding a publisher for the game, with many believing that it was "too ambitious" project. Sierra On-Line eventually signed the game after expressing interests in making a 3D action game. The game had its first major public appearance at the 1997 Electronic Entertainment Expo. Designed for Windows, the game uses a heavily modified version of the Quake engine called GoldSrc (Gold Source).

On its release, critics hailed its overall presentation and numerous scripted sequences, and it won over 50 PC Game of the Year awards. Its gameplay influenced the design of first-person shooters for years after its release and it is widely considered to be one of the greatest computer games of all time. As of 16 November 2004, Half-Life sold eight million copies, and 9.3 million copies by December 2008. As of 14 July 2006, the Half-Life franchise has sold over 20 million units. Half-Life was followed by the 2004 sequel Half-Life 2, which also received critical acclaim. Half-Life has had a notable cultural impact with its community mods and sequels spawning a large fanbase and cult following.

Half-Life is a first-person shooter that requires the player to perform combat tasks and puzzle solving to advance through the game. Unlike its peers at the time, Half-Life used scripted sequences, such as a Bullsquid ramming down a door, to advance major plot points. While most contemporary first-person shooters relied on cut-scene intermissions to detail their plotlines, Half-Life's story is told entirely by means of scripted sequences, keeping the player in control of the first-person viewpoint. In line with this, the game has no cut-scenes, and the player rarely loses the ability to control Gordon, who never speaks and is never actually seen in the game; the player sees "through his eyes" for the entire length of the game. Half-Life has no "levels"; it instead divides the game by chapters, whose titles flash on the screen as the player moves through the game. Progress through the world is continuous, except for breaks for loading.

The game regularly integrates puzzles, such as navigating a maze of conveyor belts, or using nearby boxes to build a small staircase to the next area the player must travel to. Some puzzles involve using the environment to kill an enemy, like turning on a steam valve to spray hot steam at their enemies. There are few "bosses" in the conventional sense, where the player defeats a superior opponent by direct confrontation. Instead, such organisms occasionally define chapters, and the player is generally expected to use the terrain, rather than firepower, to kill the "boss". Later in the game, the player receives a "long jump module" for the HEV suit, which allows the player to increase the horizontal distance and speed of jumps by crouching before jumping. The player must rely on this ability to navigate various platformer-style jumping puzzles in Xen toward the end of the game.

For the most part the player battles through the game alone, but is occasionally assisted by non-player characters; specifically security guards and scientists who help the player, the former who will fight alongside and both who can assist in reaching new areas and impart relevant plot information. A wide array of enemies populate the game including parasites of Xen such as headcrabs, bullsquids, headcrab zombies and Vortigaunts. The player also faces human opponents, in particular Hazardous Environment Combat Unit (HECU) Marines and black ops assassins who are dispatched to contain the extra-dimensional threats and silence all witnesses.

The iconic weapon of Half-Life is the crowbar, which can be used for melee fighting as well as for clearing obstructions and breaking apart boxes and crates, which sometimes contain useful items. The game also features numerous conventional weapons, such as the Glock 17 pistol, Franchi SPAS-12 shotgun, MP5 submachine gun with an attached M203 grenade launcher, Colt Python .357 Magnum revolver, and rocket launcher as well as unusual weapons ranging from a crossbow to weapons from Xen and genetically engineered weapons; such as an organic homing gun and flesh-eating parasites called "Snarks". Two experimental weapons, the tau cannon (nicknamed the Gauss gun) and the Gluon Gun, are built by the scientists in the facility and are acquired by the player late in the game. 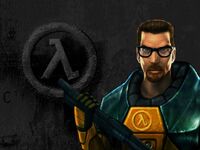 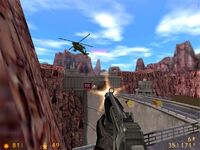 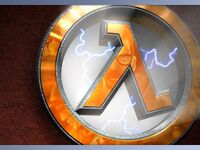 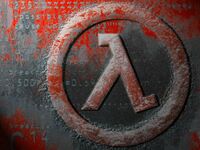 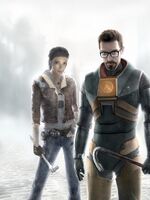 Alyx with Gordon in Half-Life 2 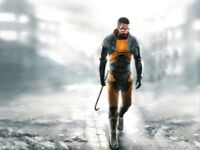 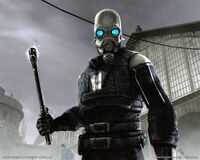 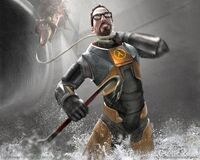 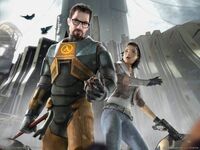 Gordon with Alyx in Nova Prospekt, with the Citadel visible 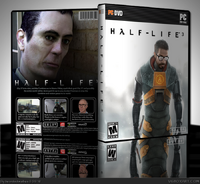 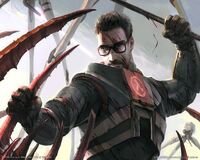 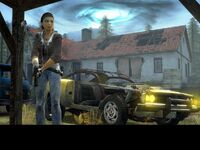 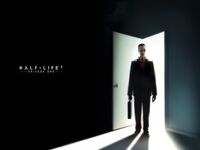 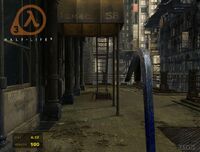 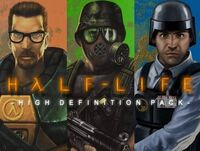