The background of this map is set in Old Havana. The Terrorists have taken four political leaders as hostages where they are placed in two rooms. The Counter-Terrorists must rescue all four hostages or kill all the Terrorists to win the round. There are three rescue zones in this map.

There are four pathways heading to the hostage rooms in this map.

This map was released alongside Spade and Keith Icahn on 4 April 2012.

This map was released alongside Open Beta Test on 23 September 2014.

This map was released alongside Open Beta Test on 26 March 2015. 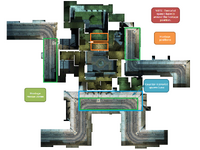 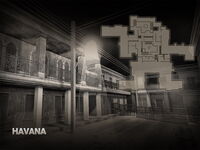 Part of Havana that is mirrored in Dead End

Hunter and Spade in Havana
Add a photo to this gallery

Retrieved from "https://cso.fandom.com/wiki/Havana?oldid=255895"
Community content is available under CC-BY-SA unless otherwise noted.