Hero is a male character in Counter-Strike Online.

After 20 seconds of a round, a random player will be chosen as the hero. Sometimes, no one will become the hero and sometimes, more than one player will become the hero. However, only male characters are able become the hero, and the Heroine for female characters. Hero can choose to equip 1 of these weapons: SVD Custom, Quad-barreled shotgun, M134 Vulcan or Dual Kriss Custom; also the Dual Desert Eagle will be provided as main secondary weapon automatically. His weapons (except the secondary) cannot be dropped even with Deimos's [Shock] ability.

For the zombies, the hero icon will be seen by them as they will alert the hero because it is a very high threat. This also applies to the Heroine. Just like other human characters, the hero is still vulnerable to zombie's attacks. When a host zombie infects the hero, the zombie will evolve to an origin zombie instantly.

Player can use a soccer version of the hero - Max Thacker, who's wearing a soccer uniform during the game. If you use the character in the soccer mode, Strength level +1 and start bonus will be applied.

Pop-up message showing the player has been selected as Hero 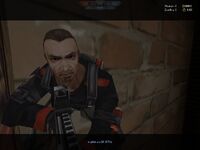 Retrieved from "https://cso.fandom.com/wiki/Hero?oldid=280689"
Community content is available under CC-BY-SA unless otherwise noted.