Give Deimos and Ganymede

This set was removed after the Free Update patch, as now the zombies become default in all player's inventories.

This set can only be used in Zombie (Mutant, Hero) modes. Allows you to use both Deimos Zombie and Ganymede Zombie classes.

Special zombies that began appearing in large numbers after the Phobos prototype was discovered. Intel shows that they have a similar genetic makeup to the Phobos and possess numerous strengths beyond the standard zombie. They can use long distance attacks to instantly disarm their opponents if they are in range, forcing equipped weapons to drop. 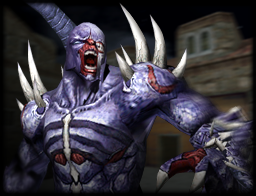 According to Aegis Institute’s data, they are called Ganymede and classified under siege type Deimos. They are a terrifying enemy covered in armor and spikes allowing them to endure waves of suppressive gunfire. Such protection lets them rush humans easily with their ability to charge at high speed.