For the counterpart faction, see Zombie. 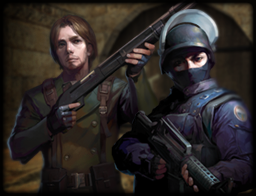 Human is a team in Zombie Modes.

In this mode, the Human team must prevent themselves from being attacked by the zombies and survive the round. The attacked Human will turn into a zombie.

Similar to Zombie 1: Original, except that player will coop with Bots.

In this mode, the Human team must survive the round or reach the targeted area without all of the members dying. There is no infection in this mode but the difficulty of zombies increases as the game progresses.

This mode is where Humans need to cooperate with the team members to build the shelter and survive from the zombies. There are cooperation and team match options.

In this mode, some random players will be selected as the zombie bosses to annihilate the humans. The human team have to battle against them with bots to assist and can transform into an XT-300 Goliath upon summoning.

The gameplay is similar to Zombie Infection modes, except that humans will get killed instead of infected once a zombie attacks them. On the other hand, half of the players are infected but are unable to see, move or attack during the 20 second countdown.

In this mode, the human plays role as Soy to experience the secrets behind Zombie Scenario as read in the case file. Player can achieve the given goal alone or compete with other players.

In this mode, at least one zombie has to reach the escape zone before the time ends. Meanwhile, the humans must kill the real zombies (human players, not AI controlled) within the time limit or prevent one of them from reaching the escape zone.