Hunting Dagger (hdagger) is a melee weapon in Counter-Strike Online.

This Swiss-made hunting dagger are for hunters who hunt animals. Hunting Dagger is used in close, critical situations and rushing tactics.

This is a hunting dagger that made in Swiss. It is created for hunters which are used for hunting. It is recreated as a new weapon through an actual battle in fierce battlefield. Battle Hunting Dagger can be obtained from Weapon Release event.

The Hunting Dagger, made in Switzerland, was used for hunting and hunting as a dagger made for hunters. It was decorated with luxurious patterns. 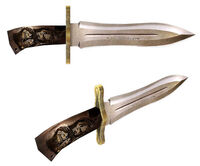 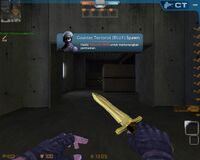 View model
Add a photo to this gallery

Retrieved from "https://cso.fandom.com/wiki/Hunting_Dagger?oldid=279183"
Community content is available under CC-BY-SA unless otherwise noted.