See Natasha (Casual) for her rival.

Jennifer (Uniform) is a female Terrorist character in Counter-Strike Online.

Jennifer has joined the Terrorist side after suffering and sacrificed from the experiment. She has been using her unique ability to assist in terrorism act. Her courage and braveness have been recognized by her comrades as she live up to her reputation and title as a Terrorist. The new uniform shows her changes.

This model was released alongside Natasha (Casual) and Double Casual Package on:

Choosing this character is good for damaging high health zombies and bosses. However, take note of her low Kevlar strength and reserved ammo. 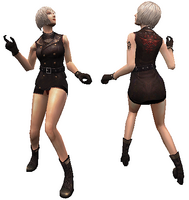 Retrieved from "https://cso.fandom.com/wiki/Jennifer_(Uniform)?oldid=279689"
Community content is available under CC-BY-SA unless otherwise noted.