For his Counter-Terrorist counterpart, see Lynn.

Kai is a Transcendent grade Terrorist character in Counter-Strike Online

Real name is William. After losing his parents to a sudden accident as a young child, he was taken into an orphanage with the help of Victor, There, he met Lynn, with whom he forged a sibling-like bond. He joined the Special Forces with Lynn after leaving the orphanage and started assisting Victor, but later learned that his parents perished due to Victor's quarantine order, issued over a concerns about the potential spread of the zombie virus. After learning the truth, William changed his name to Kai and swore to make everyone who was involved in his parents death meet a painful end.

(This character somehow has a connection to Rose Phoenix upon his death voiceline).

His real name is William. As a child, during the summer holiday, while he lives away from family in a compound. The transporters from Rex Laboratory that its sound passes through his ears and then an attack happened. William loses all his beloved family in one morning as the Rex virus spreads to the town. William, who was a minor at the time, was sent and live in a military orphanage under special provisions. There, he met Lynn, who relies on each other and becomes like a brother and sister.

As an adult, William urgently joins the Special Forces together with Lynn. Then one day, while reading an document called "Determination of a Leader", he finds out what happened in his home town for during his life time. Many blamed Victor decision to trigger the closure of the quarantine order a few hours earlier than the government's announcement at the time. At first, he sees that it was a brilliant decision that saved many people with minimal sacrifice.

Later on, Victor announced to the government that the incident is an disaster caused by gas leaks from a terrorist gang. A hidden truth has been uncovered which changed William's view about heroizing Victor. He didn't know that his parents and younger sister had been sacrificed by Victor quarantine order as they have exposed to Zombie Virus, and he even followed him like his father. This caused him a violent outrage that there have been 22 victims related to the quarantine which included his parents that Victor shot them all down. He ran away from the special forces without a word, he wants to judge the Rex Institute and the government agency that caused this incident in the first place. He gathers young people who suffered sorrow like him, then formed an underground organization and change his own name to "Kai". Everyone involved with the Super Soldier project including Victor, he wants to end them all in a painful way, even some people also support his ideal. He will never stop what he's doing. 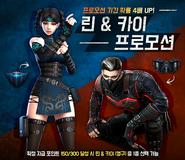 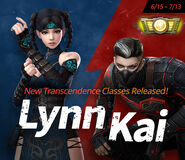