Krieg or Kyrix is a male Terrorist character in Counter-Strike Online.

All information about Krieg and his past are obscure, except some rumors that he was a mercenary spy before joining the terrorists. Despite achieving many successes, he rarely comes out. However, there is no doubt that he is one of the best warriors currently.

This character was released alongside Ha Ly and Vietnamese Classes Set on: 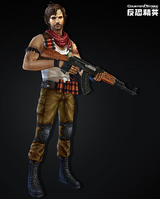 Retrieved from "https://cso.fandom.com/wiki/Krieg?oldid=276444"
Community content is available under CC-BY-SA unless otherwise noted.