Kronos is a company related to the zombie virus outbreak, but it is little known. The company also provided funding for Dr. Rex ’s research at the Rex Institute ’s Super Soldier Program.

There are several clues or hints of appearance of Kronos in game:

Many dry cargo containers with Kronos logo can be found in this map.

There's a lot of dry container found in this map with Kronos logo.

Having grown up in the United States as an adopted daughter in an emerging political family, Alice joins the defense system at Kronos as if it was a part of her destined fate. Having been assigned with support troops that handle NHP equipment and spending her time in routine training programs, she has no idea that she will experience actual battle very soon. 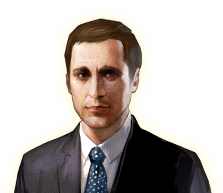 Douglas Jacob is the president of Kronos Company. In Last Ride chapter, Crono Wing and Soi revealed that he is the person that provides Dr. Rex funds for Super Soldier Project. In Episode Lucia and Rendezvous, his Kronos containers that contain Deimos and Ganymede to spread zombie virus have been discovered. In Episode Carlito, he betrayed Carlito after having Carlito doing a sample acquisition mission and sabotaging the Vanguard Company during the process.

A cybernetically-enhanced human made by Kronos. Major injuries in the past have led Cyborg for reconstruction surgery without life in critical circumstances. Devoid of humanity post-surgery, he has no interest in anything other than handling the given task.

A trial assault rifle developed by the Kronos company fed with 30 rounds of 5.56 mm special bullet. It is equipped with Hunter Killer module which can detect the presence of zombies with its thermal scope. When using the module, it is used as a tactical sniper rifle.

This is a shotgun fed with 30 rounds of 12 Gauge Thermal. It is a test weapon developed by Kronos Company equipped with Hunter Killer module. If the zombies are hit more than a certain number of times, it will detect zombies and Tactical Scanning Auto Firing feature will be activated.

The boss that appeared in Omen chapter. He's the first super soldier to encounter Jennifer's team.

The boss that appeared in Another Truth chapter. The Kronos logo can be seen on its armors.

The boss that appeared in Last Ride chapter. She came with the Drones of Kronos company to attack Soy, Jennifer and their squad.

An Asia Red Army member under Douglas's payroll. He infected himself in a last ditch effort to eleminate May's Agents.

Appeared in Episode Lucia. It was sent to naval base alongside horde of zombies inside a container ship. 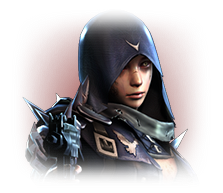 A Colossal machine of Kronos. Seen in All-Out.

Colossus Defense
Add a photo to this gallery

Retrieved from "https://cso.fandom.com/wiki/Kronos?oldid=285523"
Community content is available under CC-BY-SA unless otherwise noted.