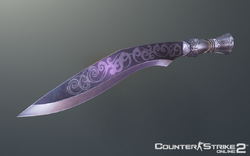 Human
Kukri is a melee weapon in Counter-Strike Online 2.

The kukri or khukuri (Nepali: खुकुरी khukuri) is a Nepalese knife with an inwardly curved blade, similar to a machete, used as both a tool and as a weapon in Nepal. Traditionally it was, and in many cases still is, the basic utility knife of the Nepalese people. It is a characteristic weapon of the Nepalese Army, the Royal Gurkha Rifles of the British Army, the Assam Rifles, the Garhwal Rifles, the Gorkha regiments of the Indian Army, and of all Gurkha regiment throughout the world, so much so that some English-speakers refer to the weapon as a "Gurkha blade" or "Gurkha knife". The khukuri often appears in Nepalese heraldry and is used in many traditional rituals such as wedding ceremonies.