The Lancer is a soldier from the Vanguard troop in Human Scenario.

Commando-like soldier that wears a helmet. Wields an AT-Lance rocket launcher. Before shooting out a rocket, he will aim with a laser sight.

Once the weapon starts beeping which serves as a warning to players, he will still launch the rocket at the last location the player was seen if one moves out of his sight. The rocket explodes upon impact and has splash damage which penetrates walls. By average, the damage dealt is moderate, depending on where it hits.

However, Lancers are weak in term of defence. They are easily eliminated with just several shots from the pistol. 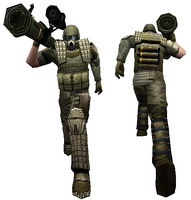 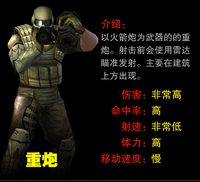