During this event, the player will receive a special tasks to receive letter cards. Usually the tasks will be like this:

Adopted with a warhead of explosion, when thrown, this grenade can inflict continuous massive damage in a wide range.

A lethal drill-designed equipment built for nonetheless that bloodshed whenever it is brought upon. It is fed with 35 rounds of 4 Gauge shotgun ammunition. It displays superior penetration power alongside mass destruction capabilities.

A hunting weapon made ​​by processing the horns of the sheep to celebrate the Sheep Year. It features a hook shape and can take down an opponent easily with a sharp chopping or optimizing attack.

A weapon designed for killing zombie, it can be projected through the target's body and then flies back to users in certain distances. The Dripper can be recovered within the throwing range, if not, it will be destroyed. Special attack will activate once the user hits the enemy head that can inflict tremendous damage.

Gáe Bolg is categorized in equipments and is used as a primary weapon slot. It is only obtainable from Letter Collecting Event. After shooting, the spear or harpoon will explode when the user decides, inflicting knockback towards the enemy.

Horse axe is a Lunar New Year weapon version of Tomahawk. It was released alongside the Horse Year and can be obtained via Letter Collecting Event. It sports a different animation for each attack.

MP7A1 Unicorn is the Lunar New Year Weapon version of MP7A1, it can be obtained via Letter Collecting Event. It shares the same performances as the ordinary counterpart except that it lacks the semi-auto mode.

The Ripper is capable to do extreme damage in a short time. It uses 200 liters of gasoline as its ammunition. Once it runs out, only the secondary fire mode can be used. The secondary fire mode makes a horizontal slash and inflicts high knockback against multiple targets while not using up any gasoline.

Serpent Blade is available during the Snake Year of Chinese New Year (2013). It shares the same animations with the Wakizashi.

Snake decoration of UMP45. Can be obtained from Snake Year event. This weapon can be obtained for free during Lunar New Year events. UMP45 Snake shares the same attribute with original UMP45 except for sounds and animations.

The Black Dragon Cannon is capable of firing 20 explosive Cannon Rounds which detonate within the targeted area creating a large volcano-like explosion that deals tremendous damage to anything in its radius. Also, the weapon's gun barrel is built short, granting excellent mobility in combat.

A dragon-themed variant of TMP which can be only obtained via special events of New Year. It has a built-in silencer. It can be purchased by the Terrorist too.

Gatling or Volcano is an event-based future shotgun which can be obtained during special event only. 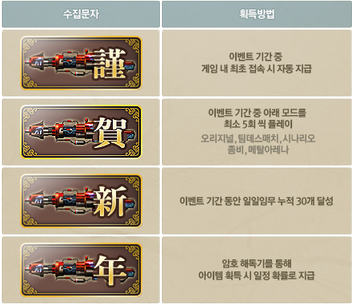 Retrieved from "https://cso.fandom.com/wiki/Letter_Collecting_Event_(South_Korea)?oldid=248162"
Community content is available under CC-BY-SA unless otherwise noted.