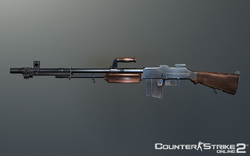 Human
M1918 BAR is an assault rifle in Counter-Strike Online 2.

The Browning Automatic Rifle (BAR) is a family of American automatic rifles and machine guns used by the United States and numerous other countries during the 20th century. The primary variant of the BAR series was the M1918, chambered for the .30-06 Springfield rifle cartridge and designed by John Browning in 1917 for the U.S. Expeditionary Corps in Europe as a replacement for the French-made Chauchat and M1909 Benét–Mercié machine guns that US forces had previously been issued.