The M2 Browning or the M2 is a heavy machine gun chambered with 250 rounds of .50 BMG. The feature that sets it apart among other machine guns is that it can be mounted to the ground by using alternate fire. When wielded without the mount, the weapon has a severe movement, accuracy and rate of fire penalty. Once deployed, the rate of fire, accuracy and damage is greatly improved, but the user is rendered immobile instead. Furthermore, aiming is only restricted to a narrow cone.

Right from the get go, the M2 Browning is very heavy and very inaccurate, even when standing still. Players move at a noticeable speed reduction and become easy targets as a result. Since the user can't move when the gun is mounted, enemy player can pick them off in a distance with ease. or overwhelming them with grenades if they have cover. Economically, the machine gun is expensive ($6200 per pop), and so does its bullets. Using it in Original mode is very questionable move at best, as would buying most light machine guns in the first place.

It does however take a shine in PvP zombie modes, where when placed properly would be able to hold down zombies with a long suppressive fire, and combined with its high magazine capacity allows other teammates to assist or take them out while zombies are distracted. Working alone with this machine gun is however very suicidal, even with its stun power. Having a teammate that can knock them back better or help watch the user's back is recommended, since the user cannot switch weapon in an event of emergency. Places such as Abyss2 and Assault's ducts is the best places for this weapon.

It should be noted that this weapon's user is not immune from Deimos and Banshee when mounted.

Due to the nature of this machine gun, Portability is best to be ignored altogether as the weapon is at its optimum when mounted than its unmounted state. While it can be enhanced to have better running speeds while on the run from zombies or switching spots quickly, switching to melee is much more constructive and frees up the points for the better ones.

Rate of Fire would help stun zombies better, and combined with maxed Ammo will add about 50 bullets to the weapon, giving the player a total of 300 bullets in a single magazine. This is good for the weapon's general playstyle, and allowing more rounds for suppressive fire.

Should Damage be maxed, maxing either Accuracy or Rate of fire and combining it with Ammo is recommended. Recoil +2 is not a bad option for those who wants to get small incentive with sustained automatic fire.

A heavy machine gun that fires incendiary .50 BMG, fed from a large backpack reservoir. After a certain amount of time, a missile launcher is activated that fires penetrating missiles that pull enemies in. 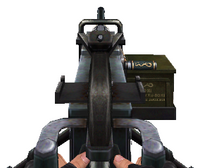 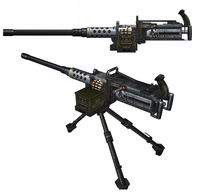