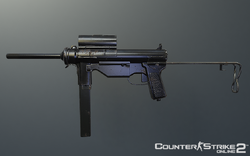 Human
M3 Grease or M3 SMG is an SMG in Counter-Strike Online 2.

The M3 was an American .45-caliber submachine gun adopted for U.S. Army service on 12 December 1942, as the United States Submachine Gun, Cal. .45, M3. The M3 was chambered for the same .45 round fired by the Thompson submachine gun, but was cheaper to produce, and lighter, although, contrary to popular belief, it was far less accurate. This myth stems from a US army training film portraying the M3 as more accurate than its counterparts. The M3 was commonly referred to as the "Grease Gun" or simply "the Greaser," owing to its visual similarity to the mechanic's tool.