HK MP5 is a German submachine gun fed with 30 rounds of 9mm. It is cheap, has low recoil, very high rate of fire, light weight and has short reload time. However, it has weak firepower and less accurate in long range.

The player can choose to unlock the MP5 instead of buying from shop, by collecting 30 kill points from TMP.

The Gold variant was released on:

The Cobalt variant was released on: 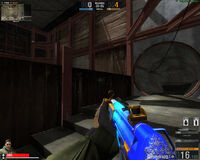