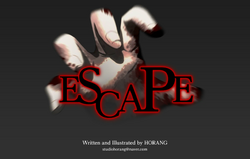 Zombie Escape or Escape is the prequel of Counter-Strike Online. It is written and illustrated by HORANG, a famous horror manga artist in Korea.

David
Member of the counter-terrorist forces, armed with FAMAS and helped the Female Researcher along the way. Eventually betrayed her by leaving her behind and shot her in the knee when fleeing from a swarm of zombies.

Female Researcher
Survivor of the Rex Virus Incident, holds the most important information. Many details regarding her is still unknown. In the last chapter, she was shot in the knee by David when fleeing from a swarm of zombies and was eventually infected into a Sting Finger.

Shark
A mysterious non-hostile man, armed with a Cold Steel knife. Sacrificed along the way while fighting alongside David to save him and the Female Researcher.

Zombies
A group of infected human which turned into zombies and mercilessly killing humans by infecting them. The virus was spread throughout the Institute, causing the Institute to be overrun by their kinds.

Choi Ji Yoon
Choi Ji Yoon has been working for the government to help and annihilate the zombies with or without aid from others. She is the older sister of the female researcher from the Zombie Escape Manga. She wants to comfirm the death of her sister by following David's squad into the Rex Research Institute.

David
A member of the Counter-Terrorist and armed with FN SCAR L in this manga. David was shocked to hear that Choi Ji Yoon was the sister of the Female Researcher.

A group which consists of eight experienced soldiers. Most members are armed with FN SCAR L with the exception of Billy, who is armed with Gewehr 43.

Billy
A member of David's squad. Saved by Choi Ji Yoon during the zombie assault. The only member that is armed with a scoped Gewehr 43.

Mike
A member of David's squad. An experienced soldier that had warned Billy for his arrogance. Equipped with FN SCAR L.

Counter-Strike parody is written and illustrated by SUTUCAR, a famous comic artist in Taiwan, well known for his comedies.

Counter Strike Online: Side of Shot is a webtoon series by "펭귄쥬스" (Penguin Juice). It revolves around 'Private Seo Yoon-Gyeong' as she joins the 707 and later gets deployed to Lost City to fight off the zombies.