militia
The Midwest Militia is a terrorist faction in Counter-Strike Online.

The Midwest Militia is a right-wing extremist movement consisting of formal and informal armed paramilitary groups. This anti-government group was founded in 1993 after the standoff in Waco, Texas.

The Militia members in game were suited with black jackets and black beanie. 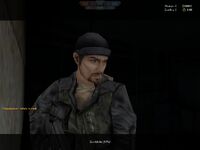