mosquito
Mosquitoes are insects to be killed during Mosquito Eradication event.

The mosquito is an insect that appeared during certain events only. During this event, a mosquito eradicating campaign encouraged players to shoot down mosquitoes that were seen hovering around the skies. Mosquitoes will buzz around at certain spots but will not harm the players. As a result for killing mosquitoes, the players are given numerous items from weapons, points to in-game items, usually that are only purchased by cash.

Tips on killing the mosquitoes 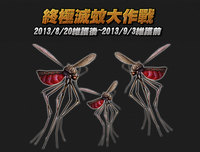