See Jennifer (Uniform) for her rival.

This model was released alongside Jennifer (Uniform) and Double Casual Package on:

This character has high Attack level but low Ammo Reservation level. This character is offensive, perfect for attackers. This character starts leveling up it's attacking power. Therefore players must use a weapon to level up faster in order to gain Health.

She now wore a white shirt with a cropped gray jacket, a red scarf wrapped around her neck, black shorts, Tights, and a pair of black high heels. 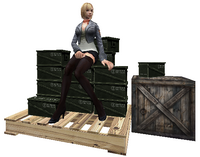 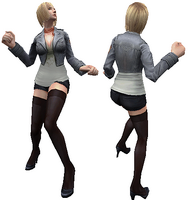