Give user random weapons
Pandora's Box or Secret Box is a special item in Counter-Strike Online.

We promise that the item you get is worth more than the box itself and perhaps, Jennifer or Natasha might even surprise you since they are no longer available for sales elsewhere. Press the Use button to open the Pandora's Box now! 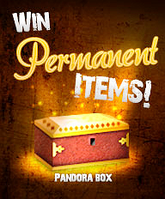