terror
The Phoenix Connexion is a Terrorist faction in Counter-Strike Online.

Having established a reputation for killing anyone that gets in their way, the Phoenix Faction is one of the most feared terrorist groups in Eastern Europe. Formed shortly after the breakup of the USSR.

The Phoenix members in game were suited with desert uniforms with black balaclavas. 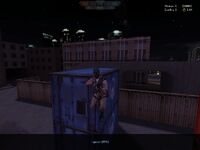