This weapon can be obtained from Epic Decoder and Power Energy event.

Sealed super tech that has been unearthed and weaponized with quantum technology. It has a basic attack that causes quantum explosions and the special features [Quantum Disruptor], that is capable of homing into and attacking multiple enemies, and [Quantum Dive], which teleports the wielder to safety in moments of fatal danger. 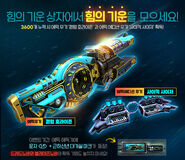 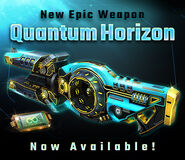 Mirage with the Quantim Horizon