For her Terrorist counterpart, see Ace.

Rebecca is a female Counter-Terrorist character in Counter-Strike Online.

First Squad Rebecca, who graduated from the Police Academy and has a dream of joining the SWAT, was disappointed to be a Traffic Patrol Officer. Until one evening, she suddenly broke her boring job to track a fugitive suspect in an urgent pursuit on the radio.

She has blonde hair tied up into a pony tail. Her eye color are unknown.

She wore standard blue US police uniform, a navy blue mini skirt, a pair of sunglasses, a black belt with silver buttons, a pair of fingerless gloves, a watch on her right hand, a handcuff hanging on her waist, a baton strapped on her left leg, a radio on her back waist, and a pair of black high heels. 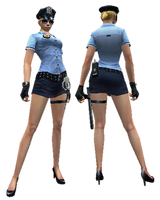 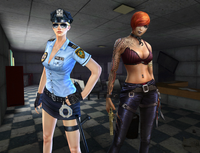