Silent, swift and can blend in with its surroundings, the SAF Scout is at home in the jungle and spies on enemy movements. The terrorists will never know they are being watched, ever! 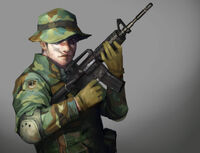